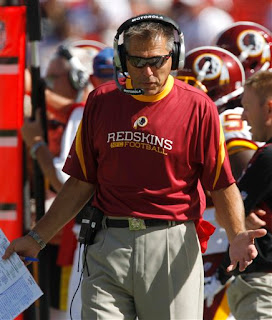 I am not going to spout venom about how you can't go into the red zone five times and come away with nine points.

I'm not going bleat about being unable to get off the field on 3rd down against a team as bad as the Rams is not excusable.

I'm not going to rail about how Jim Zorn seems increasingly overmatched for simple game management tasks, like not realizing you should wait until the game clock runs down before calling timeout (when your team is winning and, you know, wanting to leave the other team with as little time as possible).

I'm not going to complain about those things (actually, I guess I just did) because to do so would somehow indicate that I was surprised by what I saw in this game. That I somehow expected a different result.

Watching this team as long as I have, I no longer expect them to hold onto the football when they're driving at the end of a half.

I don't expect them to leave less than a seven-yard cushion to a receiver on 3rd and four. Your kid can do that math, right?

Last week, I asked what an acceptable result would be against a Rams team that was 2-14 last year, and opened the year with a 28-0 drubbing against a non-playoff team.

Here's the answer. If you think the Skins are a playoff team, this result was unacceptable.

But what if you know that they're really a mediocre team that would overachieve to win nine games? If that's what you know, then 9-7 against the Rams sounds about right. And this week's game against Detroit (0-18 going back to last year with a rookie quarterback) will still be unresolved deep into the second half.

May not seem like it, but I'm in a better place about all this now...
Posted by sleepyfloyd at 3:57 AM 1 comment:

I am doing this for my sanity and the sanity of my fellow Skins fans.

The truth - however difficult to swallow - is this: our beloved Skins may not make the playoffs this year. So the closest you may come is in what you see below. Enjoy the temporary detachment from reality: 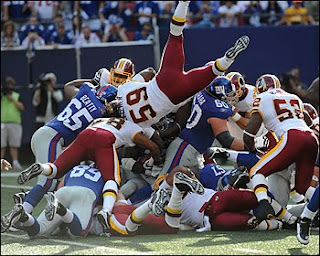 Not surprised in the least. I told me father-in-law the over/under would be 40, and I figured that if either team could score 20 points, they would win.

It's a simple formula for the Skins. If they get off the field on 3rd down, they will be in every game they play in this season. But if they don't, it's going to be a long year.

I haven't looked the the stats, but I can't imagine Portis got as many carries as he should have, especially after ripping off that 34-yarder on the first play from scrimmage. Clearly the Randle El sweep went over like a fart in church, but I applaud his effort to make up for it (he had a heck of a game).

And to allow the Giants into the red zone twice and only give up three points (in the 1st quarter) is all you can ask from that defense. Your offense has to step up in that spot. Looking back, it seems that Washington's defense spending 13 minutes on the field in the 1st quarter was devastating - they never really recovered from that. I saw Haynesworth on the sidelines for two key 3rd down conversions, and you have to hold the offense responsible for that, in part. Three-and-outs hurt you on both sides of the ball.


So now you look to next weekend's game against a Rams team that got taken to the woodshed in Seattle, and you have wonder what constitutes success in that game? It can't just be to get a W, right?
Posted by sleepyfloyd at 8:57 PM No comments: