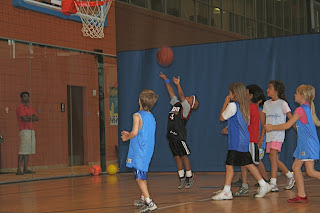 I've written a little about how my kids are starting to be drawn to the game of basketball. It's heartwarming, especially considering the fact that I haven't dragged, coerced or otherwise forced them to embrace the game.
My history goes from grade school (not much pt), to junior high (that's an eight foot rim, btw) and then high school. It really ended after college, though I still mistakenly believe I can play.
It's like this: I'm slow, my jump shot is erratic, I couldn't defend a toddler (I mean I'd hold him under 10 points, and he might get frustrated, but he'd be able to get his shot off whenever he wanted). And I'm probably good for 6-8 minutes a game, due to my limited stamina. Other than that, my game is as tight as it has ever been.
Maya and Kevin are just getting started though. They looked forward to being able to stay up and watch part of the NBA Finals, which start way too late for kids. I mean, if the NBA ends up missing out on a generation of kids, it's going to be because they're all asleep by the time the games come on.
So Saturday I was in my element, watching the kids play (and have a great time) and actually do pretty well, in my opinion (which is probably biased). Then, this morning, I get word from big brother that his boy is wreckin' shop down in his basement (check out the shimmy after the jump).
Watch out for these Nana-Sinkam kids. They're carrying the torch...

Posted by sleepyfloyd at 6:42 AM No comments: 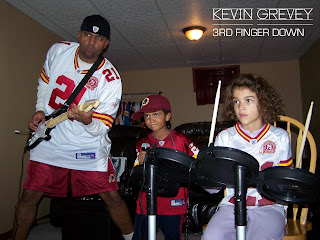 So I made mention recently of the KevinGrevey project. Here's the lowdown (also, you notice that techies and other nerdly-types generally begin sentences with the word "so?" I'm just sayin'...)

I started a project that was initially to be a Christmas gift for the Mrs. A couple of her favorite songs I covered using instrumental tracks and Garage Band. (click at your own risk. It's pretty bad, but seemed like a good idea at the time). But then Rock Band came out.

With that, Maya and Kevin got into the act. Next thing you know, we've recorded two additional tracks for the album, as well as a video and a live performance.

So, the album is called "3rd Finger Down." No original tracks since we're not original (in fact, we're decidedly derivative). The title comes from the finger symbol, which is a dedication to the late Sean Taylor, Maya's favorite 'Skin.

If you hold your middle finger down with your thumb, the remaining digits make a "2-1," which was Sean's jersey number (which we're all wearing on the album cover). It's also an obtuse reference to a lyric from Prince's Emancipation album, but that's way off-topic.

Anyway, we're clearly as dysfunctional as any rock band ought to be. Our lead singer is petulant, often loses interest midway through a song, and is missing his front two teeth (though they are growing in). Our drummer/bassist can be a little moody, and stubbornly claims to have never overslept. While our lead guitarist can't actually play the guitar.

Other than that, we're straight fire.
Posted by sleepyfloyd at 3:23 AM No comments:

That was quite an interview the Big Ticket gave last night after the Celtics smushed (that's the technical term) the Lakers in a decisive game 6. If you didn't see it, you need to just watch it and draw your own conclusions. ("I have been usurped" - what is this, Hamlet?")

I'm figuring that moment was a couple of notches up from the Virginia Independent School State Championship, so I won't profess to know what level of decorum the aftermath of an NBA title calls for.
Posted by sleepyfloyd at 4:34 AM No comments:

Throwback of the Week - Brooksie 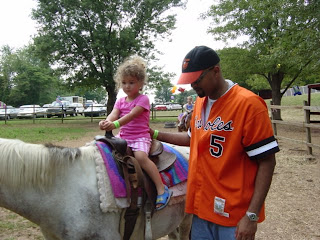 It may not be of the week. It may be of the two weeks.
Today's entry is a 1971 Baltimore Orioles orange alternate #5 (Brooks Robinson) by Mitchell and Ness. I actually got this shirt from the Orioles store and not from the Philly location.
This jersey was part of the ill-fated "all orange" alternate that the O's tried in the early 70s. They went over like a fart in church. Even in the brightly colored polyester heyday, there was only so much orange people could take. They weren't the only ones who tried the monochrome look - and failed.
This jersey became a staple of my on-stage attire while fronting a band called "Soul Expression." We were the house band at the Meritage martini bar in West Chester, Pa. (which has since closed, but that wasn't because of us).  All I needed was one of these jerseys, a bucket hat and some shades to overcome my enormous stage fright.
Soul Expression was the precursor to my current project, KevinGrevey. Keep an eye out. We're going to do big things.
Anyway, this jersey is now in my brother's collection. I have since upgraded to a '76 Jim Palmer #22, with the sweet NOB nameplate.
Posted by sleepyfloyd at 5:29 PM No comments:

Labels: throwback of the week

Things I learned from my Father 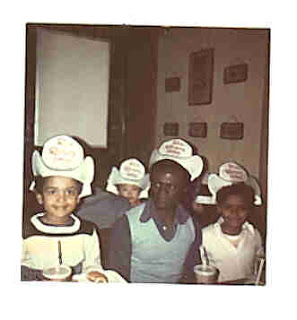 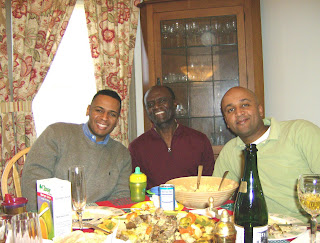 Thanks, Dad.
Happy Father's Day to you, and my older brother Patrick (he's the less handsome one on the left in the more recent picture).
Posted by sleepyfloyd at 7:00 AM 3 comments:

We can’t solve problems by using the same kind
of thinking we used when we created them. - Albert Einstein

Can you think of anyone who may benefit from this kind of advice?
Posted by sleepyfloyd at 12:54 PM No comments:

The Apple and its Proximity to its Originating Tree

So I'm in the twilight of my basketball career, right? But that's OK, because my children have taken to the game, and now I can sit in the gym and watch them grow closer and closer to the game that did so much for me.
What is several magnitudes cooler is when I see hints of my game in their game. To wit my recent "post game interview" with my son Kevin (below).
Now, I was never known for my defensive abilities (and I would rather shoot than pass), but I promise that I have not exerted influence on the child in any way.
Posted by sleepyfloyd at 5:29 PM No comments: 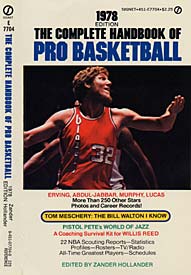 When I was growing (and falling in love the game of basketball), one my favorite things to do was read "The Complete Handbook of Pro Basketball," by Zander Hollander. Two main reasons for this: 1) It was the best way for me to work toward my goal of being to name the starting fives for all 23 NBA teams (yes there were 23 teams back then... let me know when you're done laughing); and 2) Hollander's writing style was hilarious and formed the basis for sizable chunk of my sense of humor.
He pulled no punches when offering opinions on players in the capsules that he wrote, especially the bench-warmers. One that sticks out in my memory:

On Dale Ellis,  early in his career with the Dallas Mavericks: "Dale has proven in the past season that he will take a) no guff; and b) any shot"

The book also had every player's salary, which made it easy to compare stats with pay and find out who was really "stealing money."
I titled this "jackpot" because, after searching for a while, I was able to find a couple copies of the books ('83, '86 and '88) on Amazon. In 6 to 14 days (shipping time varies), I will be immersed in mid-80s NBA-lore, reading about Fred Roberts, Chuck Nevitt and the venerable Geoff Crompton.
Posted by sleepyfloyd at 5:09 PM No comments: 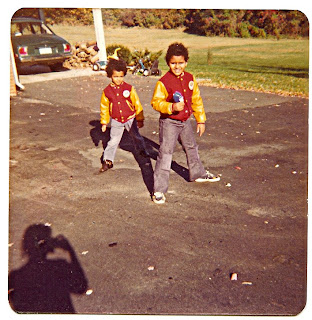 First, about the title. I'm not Carl Anderson, and I'm not sure a real Carl Anderson ever existed.
Carl Anderson's Lockerroom was a sporting goods store in suburban Washington, DC (Alexandria, Va. more specifically) where I grew up. They were the only store around that sold sports jerseys. This was in the days before replica jerseys were available at every big box retailer and department store.
So here was the pattern: I would beg my mom to take me there, she'd become apoplectic upon seeing how much money they were asking, and then - true to the Eddie Murphy "Houseburger" standup routine - assure me that she could make just as nice a jersey with a polyester tank-top from K-Mart and an iron-on number set.
Carl Anderson's grew to symbolize the barrier between me - a budding sports jersey junkie - and the tight, uncomfortable brightly-colored uniforms my athletic heroes wore.
Later in life, and interesting thing happened. The throwback jersey craze dashed through like a three-year flash fire, taking me from clairvoyant trailblazer (since I obsessed over this stuff long before it was trendy) to inappropriately juvenile trend-follower (since I obsess over this stuff long after it was trendy).
Funny how even when you don't change, you change.
So, what am I doing here? Can't answer that completely just yet, on account of I'm still figuring that out. So I guess I'll ruminate about those things that continue to interest me, post a pic or two, and we'll see what happens.
FYI, I'm the one in the back in the picture (behind big brother) that's a picture of me when I was younger. Reminds me of Mitch Hedberg's classic: "Every picture of you... is a picture of you when you were younger."
And if you're actually reading this, one question...
How in the hell did you find this place?
Posted by sleepyfloyd at 2:28 PM 6 comments: