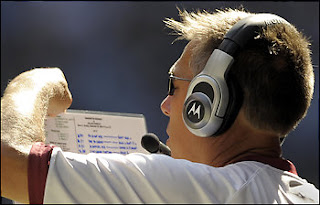 You know, the straws are flying all around, and they're really hard to get a hold of.... I actually don't get this analogy at all. Let's begin again.

This is what trying to drink coffee with a fork looks like.

Let's review the state of the franchise:
What can we pile on top of all this? Anyone? How about Monday Night Football? Nationally-televised home game against the Eagles, who are probably a little upset after their listless, losing performance against the Raiders. This could really get ugly.

As for the game, there's not much new to say. Any team that fails to run the ball, fails to stop the run, and fails to get off the field on 3rd down will have a hard time winning in this league, and will often look very bad on the field. The Skins are no exception to that.

As I mentioned before, I will try to liveblog (or at least tweet - @nanasinkam) during the game next week. Problem is, I'm on AT&T, and the NFL of course is Sprint Country. Danny does his part, by making it almost impossible to get a signal in his stadium. So we'll see....
Posted by sleepyfloyd at 3:31 AM No comments: 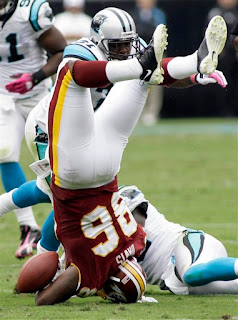 If there is not a rule that you should not be able to push a player into his teammate who is attempting a fair catch, then there ought to be. Though I can't be sure the Skins would have pulled the game out if they had retained the ball in that spot.
Their two touchdowns came on drives of 1 and 12 yards, respectively. They didn't show anything that told you they would be able to sustain a drive - again. Defensively, the second half featured so many missed tackles, none worse than the one DHall missed on the Delhomme bootleg that sealed the win.
It would be easy to pile on Hall. In fact, what he did right there was not unlike his love tap on Mario Maningham's TD run in week 1. But things run deeper here. It seems like the Skins play to stay close, to avoid the big mistake. As a result, they make a shitload of little mistakes. None that could lose the game by itself, but they add up.

The ironic thing is this: when the NFL schedules came out in April, what would you guess I had for the Skins' record after five games?

I figured a loss at Giants, win versus the Rams. Win at Lions. And losses to Bucs and Panthers. Don't forget, the Panthers were 12-4 divisioon winners last year, and Bucs have always presented matchup problems for the Skins.

Now that all said, I'm still disappointed as heck at the 2-3 record, because those two teams turned out to be bad, and I feel no confidence about winning the next two games.

The bright spot? I am slowly convincing my fellow fans that this season must be sacrificed.

Sacrificed for the greater good of proving to ownership that their approach won't work.

A sacrifice that leads to our owner sitting across from an esteemed coach/GM this winter and saying "obviously I don't know what I'm doing here, so I'm, handing over the football operations to you."

I will be at the Eagles game in two weeks, with plans to liveblog from there (if I can get a signal inside FedEx, which is dicey at best). If we're 2-4 going into that game. It will be ugly. Ugly probably either way, really.
Posted by sleepyfloyd at 10:09 AM No comments:

I can't say that I'm ever disappointed to see the Skins win, but I will admit that I did entertain the fantasy of what a second loss in as many weeks to a winless team would do. 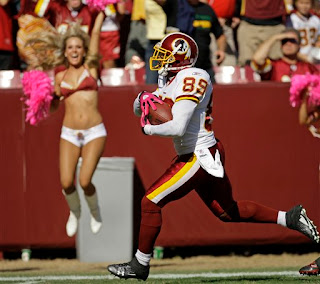 It would be brutal, but if it convinced Syderrato once and for all that we are more than "one or two players away" from being a championship contender, then it would be a brutality to be endured.
As for the game, I was able to catch it in snippets. I had another engagement to attend, but I became pretty proficient at flipping between the ESPN ticker and the Slingbox iPhone app (linked to a box at my in-laws that was tuned to the game) while at the same time appreciating nature photography and breathtaking vistas of the Chesapeake. Did you know that we've so overharvested the Bay that there only exists 1% of the population of 100 years ago?
Yeah, I didn't know that either. Lay off the oysters for a little bit. Have some crackers.
So, from what I saw, I'm disappointed that despite all of the draft picks, depth chart adjustments and Keith Sweat-like "I'm gonna, we're gonna, get this riiiiight, girl," our offense still consists of: 1st down Portis, 2nd down Moss, 3rd down Cooley, 4th down punt, then commercial and I go pee.
That's not sustainable. Kelly or Thomas, or even Fred Davis! Somebody needs to step up and take the pressure off those guys.
Defensively, we rebounded nicely from getting gashed by the Lions in the run. It's just so hard to measure your progress against quarterbacks like Stafford and Josh Johnson. I mean, how many points do you expect to give up there?
Last thing. I think Raheem Morris made a mistake not going for it on 4th and goal with 5 minutes and change remaining. I know, hindsight is 20/20 and all. But what have the Skins shown you all year that tells you that they start with the ball on the 2-yard line and even get one first down? Let alone run out the clock? Even if they failed to convert, Tampa would have gotten the ball back around midfield with probably 3 minutes left.
Moreover, you have to think that the Bucs needed a touchdown to win the game. Their kicker had already missed two manageable field goals in the game (one going into that end of the stadium).
So, at the end of it, which would the Bucs rather have had? Two chances with the ball to score a touchdown and win the game? Or ask your field goal kicker to make two field goals inside of six minutes (and maybe another one in overtime), including maybe a 45-yarder to tie the game with the clock running out? After he's already missed two?
I'm glad he made the choice he did, though.
And I don't know about the Panthers. I need a couple of days.
Posted by sleepyfloyd at 7:03 AM No comments:

Well, I completed a self-imposed Vow of Silence until noon at Wednesday. I decided not to say anything about the game, lest I say something I would later regret.

Yet after three days, where I contemplated the fact that punter Hunter Smith (#3, right) remains among the Skins' leaders in points scored, I still felt like I had nothing productive to say.
So, I will watch the Buccaneers game, in which the Skins will attack Josh Johnson in his first NFL start, on the road, in front of 90,000.
Football logic tells what this result should be (ie Johnson and the Bucs should be crushed).
But what will actually happen?
Anyone's guess, I suppose.
Posted by sleepyfloyd at 9:09 AM No comments: